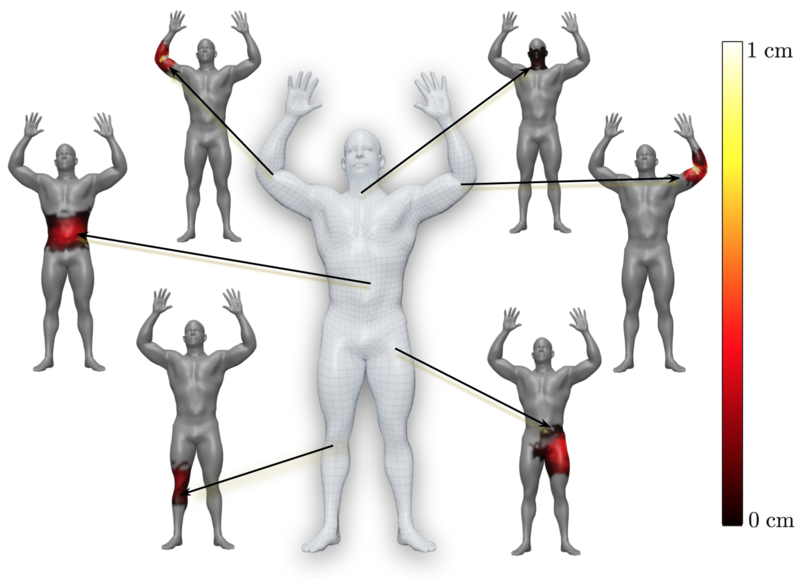 STAR is a compact realistic model of the human body, with learned sparse spatially local corrective blend shapes, that is is a drop in replacement for SMPL.

The SMPL body model is widely used for the estimation, synthesis, and analysis of 3D human pose and shape. While popular, we show that SMPL has several limitations and introduce STAR, which is quantitatively and qualitatively superior to SMPL. First, SMPL has a huge number of parameters resulting from its use of global blend shapes. These dense pose-corrective offsets relate every vertex on the mesh to all the joints in the kinematic tree, capturing spurious long-range cor- relations. To address this, we define per-joint pose correctives and learn the subset of mesh vertices that are influenced by each joint movement. This sparse formulation results in more realistic deformations and significantly reduces the number of model parameters to 20% of SMPL. When trained on the same data as SMPL, STAR generalizes better despite having many fewer parameters. Second, SMPL factors pose-dependent deformations from body shape while, in reality, people with different shapes deform differently. Consequently, we learn shape-dependent pose- corrective blendshapes that depend on both body pose and BMI. Third, we show that the shape space of SMPL is not rich enough to capture the variation in the human population. We address this by training STAR with an additional 10,000 scans of male and female subjects, and show that this results in better model generalization. STAR is compact, generalizes better to new bodies and is a drop-in replacement for SMPL.